The Chief Constables and Police & Crime Commissioners of Wales have asked Welsh Government for clarity about when Police Officers and front-line staff will be able to receive vaccinations to protect them against Covid-19.

We have made the same case to the Police Minister and written again to him and the Home Secretary to press the issue as it is not one affecting just Wales but rests on the common approach across four Home Nations.

As a result of our discussions and correspondence with Welsh Government the First Minister has issued a statement for Police Officers and Staff (below).

As Police Leaders we have been making the case for clarity to Ministers and senior officials while making it clear that general access to vaccination should follow the provision to those who are particularly vulnerable to infection as prioritised by the Joint Committee on Vaccinations and Immunisation (JCVI) and agreed between the four UK Governments.

Having pointed out that those who work to keep the public safe face particular threats and risk, we argued that it should be made clear where they sit in the priorities for vaccination and we have also argued for them to be included on a reserve list for use of spare vaccine.

We remain in close dialogue with Welsh Government and we are also pressing the case with Home Office Ministers – arguing that it is essential for the physical challenges faced by policing to be fully understood and for those who deal daily with some very challenging circumstances to be protected during the ongoing COVID crisis.

Inconsistency in the use of spare vaccines has caused general concern across England and Wales and we have made the case for locally-managed ‘reserve lists’ through which front line workers could attend vaccination centres at little or no notice.

Police officers and front-line police staff place themselves at significant risk of contracting Covid-19 on a daily basis while enforcing the regulations set by Welsh Government. They encourage the public to stay within distancing rules and deal daily with confrontational situations without thought for their own safety and wellbeing, they say. They note that Personal Protective Equipment (PPE) can afford some protection but is neither practical nor effective in all circumstances.

The risks to members of the policing family are unique, especially as they have no choice but to intervene in situations where others would choose not to. The following are just two graphic and typical examples that highlight the positions that our officers and staff put themselves in daily, before returning home to their families and loved ones, they say.

In Wales the Police have worked closely with Welsh Government, Local Government, the NHS and our communities to tackle the impact of COVID-19. Across Wales, police officers and staff are dealing with calls to house parties and unlawful gatherings, in addition to dealing with normal day to day issues where they run the risk of assault and confrontation. Throughout the ongoing public health crisis police officers and front-line staff have worked hard to keep communities safe, stopping vehicles, checking premises and enforcing COVID restrictions. They have sought to persuade the public to stay within the rules – and indeed the majority of people have responded positively and are adhering to the restrictions. But the police teams act as the last line of defence in dealing with the minority who continuously break the law.

In spite of this, police officers and front-line staff are currently excluded from access to the vaccine that would protect them from harm. This is totally unacceptable and we are asking the Home Secretary to support the First Minister’s request for the JCVI, on behalf of the four nations, to urgently address the wider issue of prioritisation of occupations with threat, risk and harm being considered objectively in addition to the clear priority given to epidemiological evidence. While we welcome the engagement by Welsh Government Ministers and officials, our plea is for a proportionate and fair response within the priorities for vaccination and for places on the Reserve Lists.

Statement from the First Minister:
“I would first like to extend my thanks to every Police Officer and member of Policing staff who since the beginning of this pandemic have gone far beyond the call of duty in their efforts to support our communities and keep Wales safe. Each and every one of you have worked longer hours, responded to ever changing circumstances and faced a tougher climate than has ever been expected before. Your service is pivotal to the safety and health of our communities and like them, the Government is always grateful.

As we continue the critical work of keeping Wales safe through restrictions and testing, we are also rolling out our comprehensive vaccinations programme. We are making remarkable progress on this in Wales but there is still a way to go. As you are aware, like the rest of the UK, we are strictly adhering to the vaccination programme set out by the independent experts of the Joint Committee on Vaccination and Immunisation (JCVI). We are currently in the first phase of the vaccine prioritisation programme which seeks to vaccinate all those over 50 years of age, and all those 16 years of age and over in a risk group. Prioritising this way captures almost all preventable deaths from COVID-19. As we successfully move further and further through this first phase, the JCVI will be considering their recommendations on how the second phase should be implemented and as a Government we have asked the JCVI to consider occupational prioritisation based on risk of exposure. We are working with other UK nations on this to ensure there is a clear and consistent approach.

The contribution Police Officers and staff have made throughout the pandemic has been extraordinary. The vaccine provides us all with hope and by the autumn we hope to have offered the vaccine to the entire adult population in Wales. In the meantime, Welsh interests in the issue of Police and other occupations being considered for prioritisation will continue to be considered by our representatives on the JCVI. 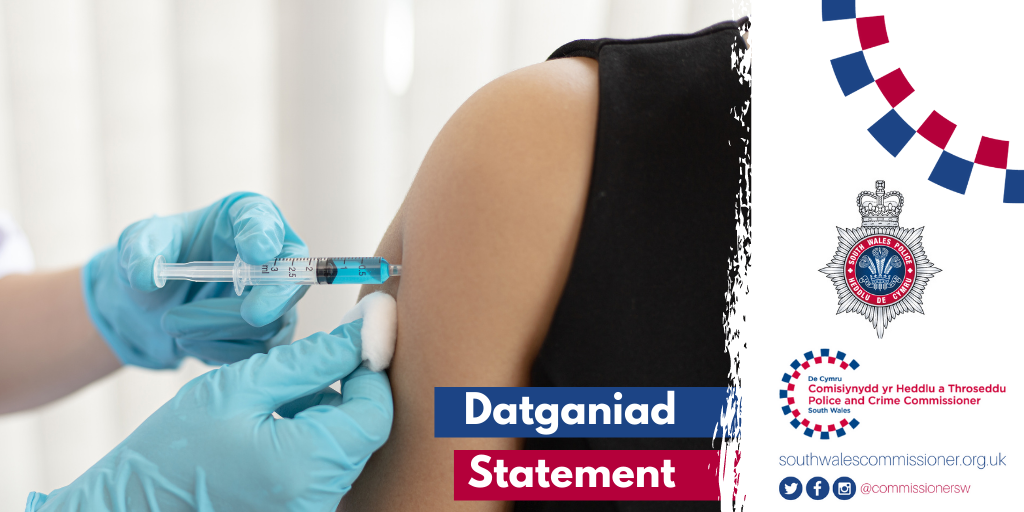 Independent Learning Review into the events at Mayhill publishes its findings

The panel that conducted an Independent Learning Review into the events at Mayhill and Waun Wen in May 2021 has published its findings today.