How, why and when did the Independent Custody Visiting Scheme begin?

The independent custody visiting scheme was established in 1984 on a non-statutory basis.

Following a period of civil disorder across some major cities in England in 1981 and in particular, the serious disorder in Brixton, the Government commissioned Lord Scarman to conduct an urgent inquiry into the events and produce a report, with recommendations to be made.

Originally referred to as lay visiting, the scheme was introduced in response to one of the several recommendations that were made in the Scarman Report. As part of his recommendations, Lord Scarman advocated a system where random checks could be made by members of the local communities to inspect the way police detained people in custody.

In 2003, custody visiting became a statutory requirement and the Home Office issued a Code of Practice to which local policing bodies and independent custody visitors (ICVs) have regard when carrying out their relevant functions.

Why do we need oversight of the police?

Custody visiting provides public reassurance that custody is safe locally and at a national level contributes to the UK’s human rights obligations. Police forces welcome the role of the custody visitors to give them an independent insight into their custody suites, which can help to improve the quality of the service they provide.

“The way in which people detained in police custody are treated is a significant test of a civilised society. Over the decades, our standards and expectations have become increasingly demanding and more humane, therefore it is important that these standards and expectations are reflected by the behaviour of our staff. Very often, the individual detained may also be a victim in some way or may be in need of intervention and support, and we must ensure that our staff are alive to these issues to interrupt the cycle of harm and prevent further offending. Scrutiny of our custody service is essential to ensure that our staff observe the high standards expected of them, and that poor standards or misbehaviour are challenged if they occur. The role of the Independent Custody Visitor is not an easy one, but it is vital one. It is a role that requires a sound understanding of our obligations and the processes we have in place to meet them, as well as patience and high personal standards to ensure the right and proper treatment of any person detained in police custody.”

“The independent custody visiting scheme initiative in South Wales is a welcomed means of oversight to our custody services department. It allows members of our community to provide vital feedback on how we treat our detainees.

The custody visitors give up their own time to perform this very important role and we are extremely grateful for their knowledge and expertise. Their feedback allows us to check that the many policies and procedures within the custody environment are being followed and detainees are treated fairly".

What the Custody Visitors Do

At least once a week, pairs of volunteer visitors from the local community arrive at police custody suites unannounced and are given immediate access to the custody area. They check on the conditions of the cells and custody suite and speak to detainees to ensure that their rights, entitlements, welfare and dignity are being met. Visitors complete a written report after each visit to provide a record of their observations and any concerns.

Any identified issues are resolved with the Custody Sergeant at the time of the visit and are reported to the Commissioner’s team to be discussed at quarterly panel meetings.

Visitors are not concerned with why detainees are in custody nor their identity and must respect confidentiality at all times. 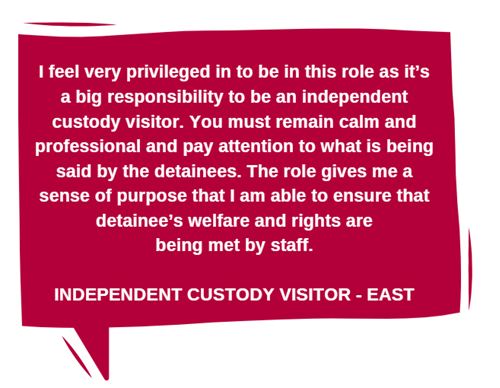 The Police and Crime Commissioner for South Wales is a member of the Independent Custody Visiting Association (ICVA). The ICVA work closely with local schemes, with the Home Office and other national organisations and individuals concerned with ensuring safety and good practice in detention.

You can find out more about ICVA from their website.

South Wales has been quality assured by ICVA as a SILVER scheme! Find out more here. 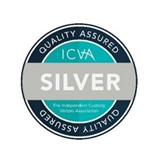 South Wales Police & Crime Commissioner Alun Michael and his team have won £182,750 from the Home Office’s Safety of Women at Night Fund, to promo…